Erie, PA – March 2006 - RIDG-U-RAK introduces a new, high-tech base isolated pallet rack storage system that has been tested up to a full 200% of seismic qualification, as outlined in the AC156 test and qualification criteria, with little or no merchandise shedding or rack damage. Unveiled at The Material Handling & Logistics NA 2006 Show in Cleveland, Ohio, RIDG-U-RAK’s new Seismic 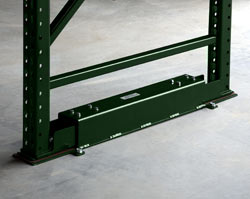 Prompted by growing concerns for the public’s safety in retail warehouse centers, the Federal Emergency Management Agency (FEMA) developed new guidelines designed to reduce risk in these facilities. In accordance with these and other guidelines, RIDG-U-RAK conducted more than 100 earthquake simulations at the Structural Engineering Earthquake Simulation Laboratory located at the State University of New York at Buffalo. This laboratory is home to some of the most sophisticated seismic equipment available for structural testing. Tests were conducted on one of two 23 by 23-foot shake tables that operate in three dimensions to best replicate real world seismic events.

Tests were conducted in accordance with the AC156 Accepted Criteria For Seismic Qualification by Shake-Table Testing of Nonstructural Components and Systems of ICC Evaluation Services to achieve performance levels as outlined in the Federal Emergency Management Agency’s FEMA 460 Seismic Considerations for Steel Storage Racks Located in Areas Accessible to the Public.

RIDG-U-RAK conducted more than 100 earthquake simulations with varying loads, product configurations and base arrangements. The testing protocol had a number of critical milestones… the Design Basis Earthquake (DBE) at 100% qualification, a Maximum Considered Earthquake (MCE) at 150% qualification and the most powerful anticipated earthquake in the United States or 200% qualification. Each series of simulations began at 25% of seismic qualification and continued until the system failed or reached 200%. During these tests, independent consultants and laboratory investigators measured the precise effects each level of earthquake simulation had on the racks and products stored.

The Seismic Base Isolation System from RIDG-U-RAK reduces the effects of seismic acceleration ground forces on the rack structure. The Base Isolation unit is positioned between the columns of the upright frames and anchored to the floor using standard installation procedures. This allows the rack’s upright frames to “travel” during a seismic event.

The RIDG-U-RAK base isolated rack system performed flawlessly during simulations up to and including the full 200% of seismic qualification level with little or no merchandise shedding or rack damage. The conventional fixed base rack with identical loads, configuration and simulation did not achieve a satisfactory qualification level and during the 200% test lost nearly its entire load. This series of tests clearly demonstrated the benefit of using RIDG-U-RAK’s base isolation technology to reduce the risk of personal injury and product loss during moderate to severe earthquakes.

The Base Isolation System does not obstruct daily operations, will not impede stocking or restocking racks, requires no special storage techniques or palletization and can be moved or repositioned during warehouse reconfiguring. This is a one-time investment in reducing the risk of product loss and personal injury during an earthquake.

RIDG-U-RAK has been committed to reducing the risks associated to storage racks during seismic events for many years. The use of a patent pending, base-isolation technology was conceived and developed by John Pellegrino, PE, President and CEO of RIDG-U-RAK. RIDG-U-RAK, a leading manufacture of rack storage systems, is a member of RMI, the Rack Manufacturers Institute, MHIA the Material Handling Institute of America and MHEDA and the Material Handling Equipment Distributors Association.