The Pellegrino Seismic Base Isolation System 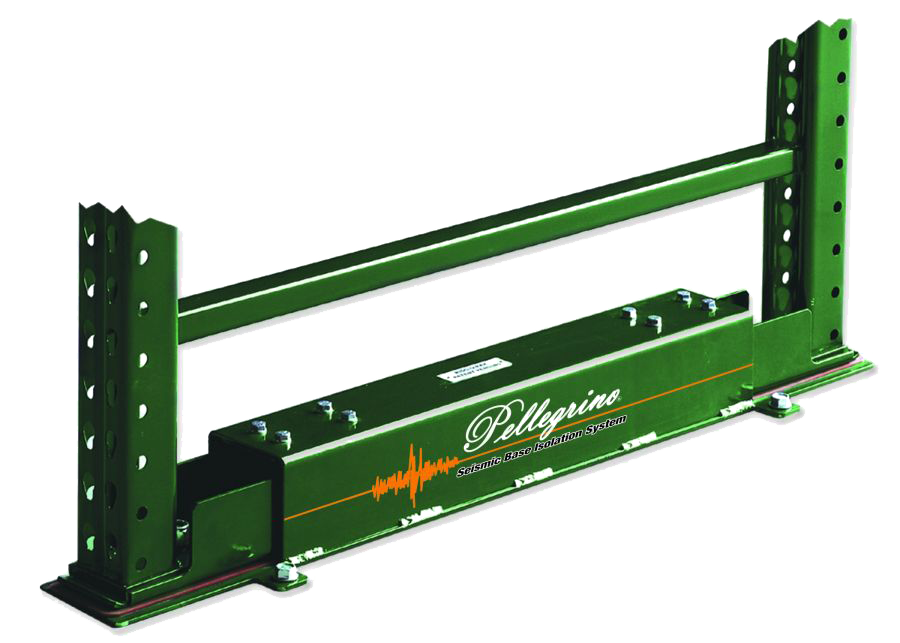 The Pellegrino Seismic Base Isolation System dissipates up to 85% of the seismic energy that can be exerted on a pallet rack storage system during an earthquake. This base isolation unit is positioned between the columns of an upright frame and anchored to the floor, allowing the rack structure to move. The Pellegrino is designed to withstand an seismic event 25% more intense than the Northridge or Loma Prieta earthquakes which reached magnitudes of 6.7 and 6.9 on the Richter moment magnitude scale.

FEMA has established new guidelines for seismic activity zones and Ridg-U-Rak responded by designing this innovative product that can make storage rack systems capable of withstanding the most powerful anticipated earthquake.

Storage Rack System Requirements:
·      Maintain rack integrity during large seismic events
·      Reduce the risk of personal injury during an earthquake
·      Minimize product loss
The Pellegrino Base Isolation Seismic System:
·      Meets new performance guidelines developed by FEMA
·      Passed rigorous testing at the Structural Engineering Earthquake Simulation Laboratory
·      Can be utilized in a variety of rack configurations
·      Can be retrofitted to existing rack
RIDG-U-RAK conducted more than 100 earthquake simulations with varying loads, product configurations and base arrangements during five weeks of testing at the Structural Engineering Earthquake Simulation Laboratory located at the State University of New York at Buffalo. This world-class laboratory is home to some of the most sophisticated seismic equipment available for structural testing. These tests were conducted on one of two 23 by 23-foot shake tables that operate in three dimensions to best replicate real world earthquakes.
The sequence below shows the potential damage fixed-based storage racks that can occur during a severe earthquake. 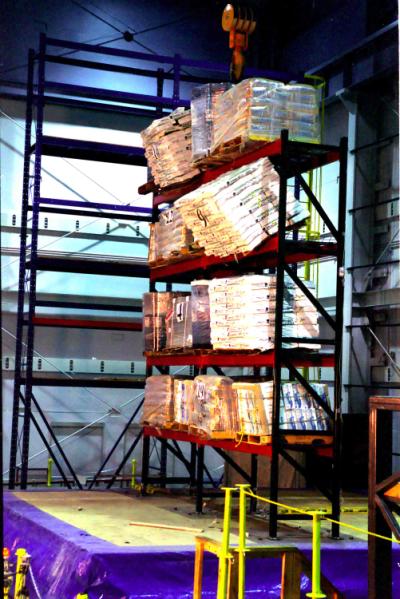 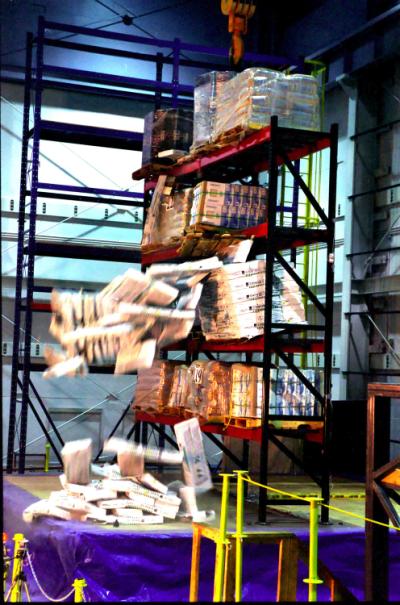 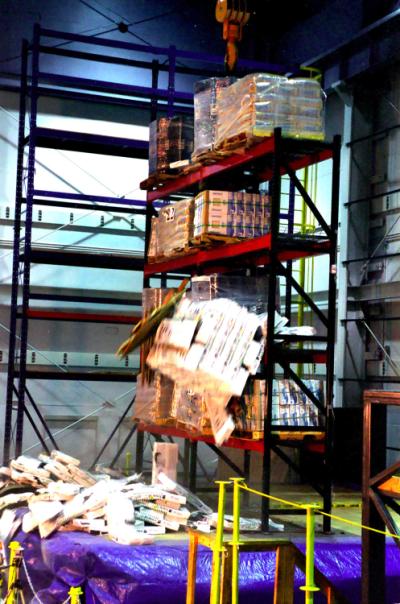 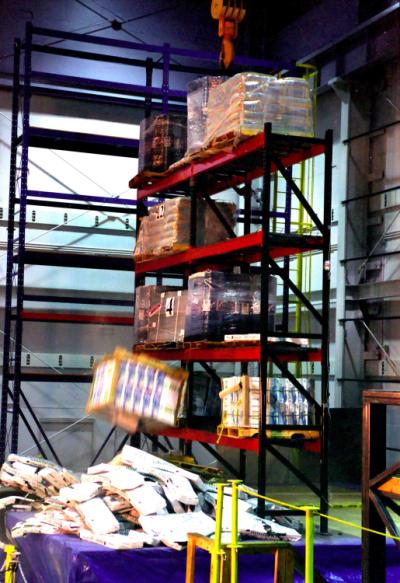 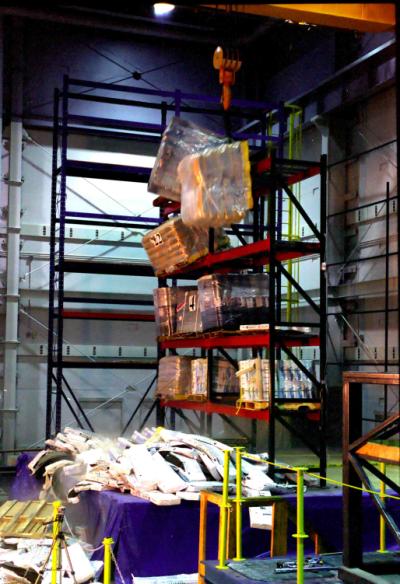 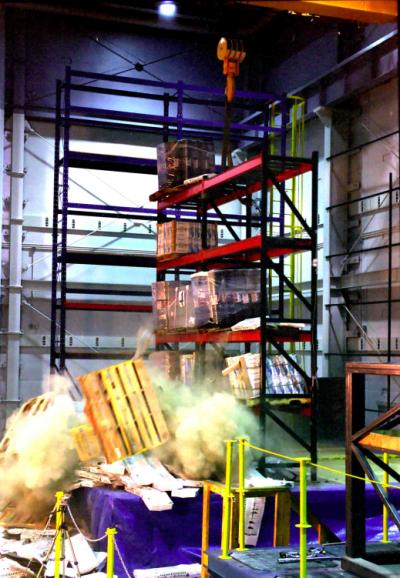 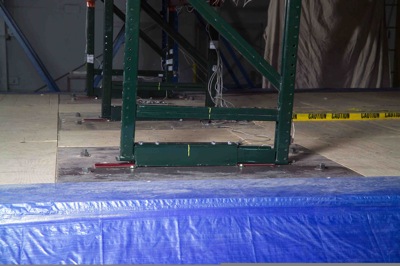 During these tests, independent consultants and laboratory investigators measured the precise effects that each level of earthquake simulation had on the racks and products stored.

The Pellegrino Seismic Base Isolation System has proven to withstand the most powerful earthquake anticipated in the United States with little or no merchandise shedding or rack damage. Used in a warehouse or big box retail outlet, this can reduce the risk of product loss and personal injury.

Ideal for the following industries:

More seismic information is available at:

This report FEMA 460 highlights issues for consideration in the seismic design, installation, ongoing inspection, maintenance, and use of steel single selective pallet storage racks located in areas of retail warehouse stores and other facilities accessible to the general public. Included are a review of the performance of storage racks in past earthquakes; a history of the development of codes and standards used for storage rack design and current storage rack design practices; guidance on recommended performance goals and design requirements for storage racks; guidelines for implementation/responsibilities associated with the specification, procurement, and installation of pallet storage racks; suggested guidance for securing contents; recommendations for operations and use; suggested guidance for quality assurance programs; a discussion of current and past storage rack research and testing; suggestions for post-earthquake inspections; and proposed modifications to seismic design provisions and standards for racks.

The U.S. Geological Survey (USGS) National Seismic Hazard Maps display earthquake ground motions for various probability levels across the United States and are applied in seismic provisions of building codes, insurance rate structures, risk assessments, and other public policy. This update of the maps incorporates new findings on earthquake ground shaking, faults, seismicity, and geodesy. The resulting maps are derived from seismic hazard curves calculated on a grid of sites across the United States that describe the frequency of exceeding a set of ground motions.

Earthquake Scenarios describe the expected ground motions and effects of specific hypothetical large earthquakes. In planning and coordinating emergency response, utilities, emergency responders, and other agencies are best served by conducting training exercises based on realistic earthquake situations, ones that they are most likely to face. Scenario earthquakes can fill this role; they can be generated for any potential hypothetical future or past historic earthquake.

Do you need Rack now?

Find a location near you.

A demonstration of industrial storage rack being impacted by earthquake equivalent seismic forces and how a base isolation system engineered by Ridg-U-Rak can dissipate these forces. 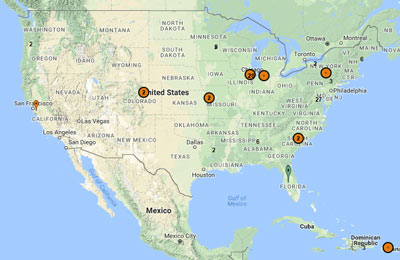 Distributors have Ridg-U-Rak products in stock. 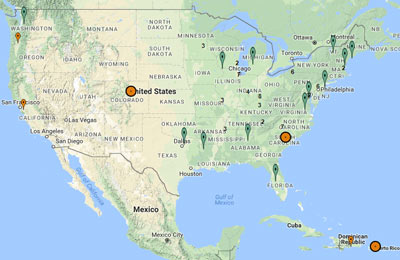 Ridg-U-Rak has dealers all over North America 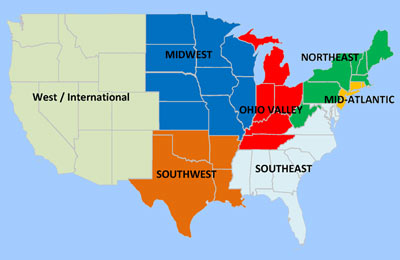 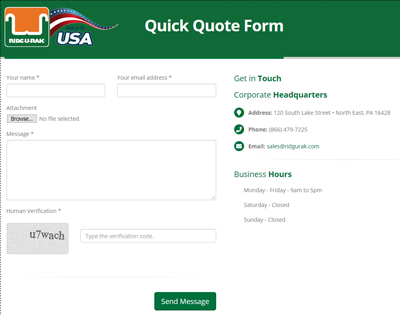 Send us your specs and we'll help you build it. 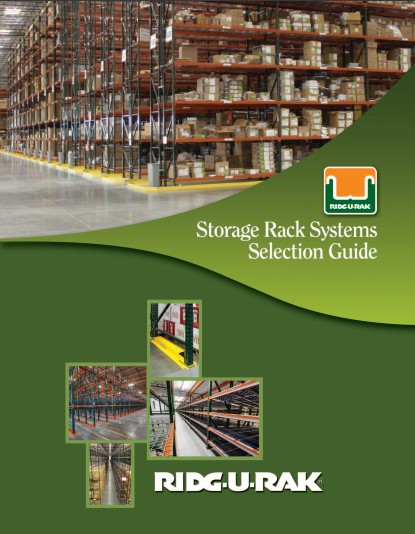 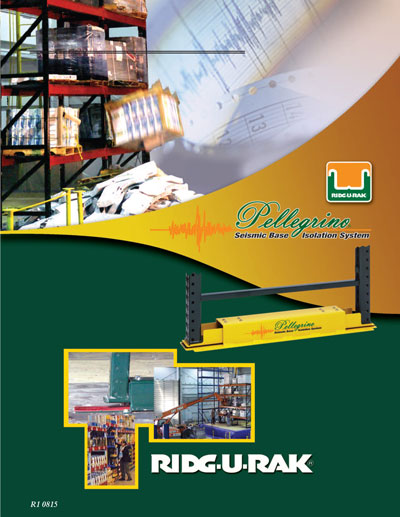 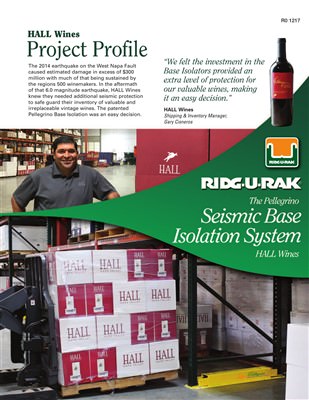 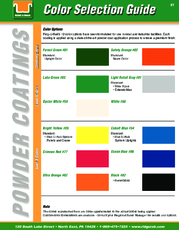 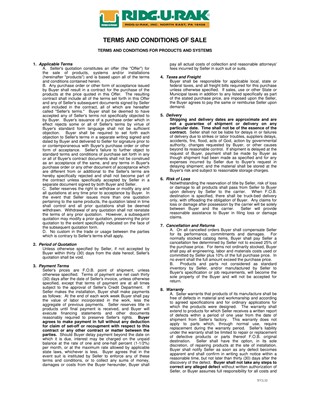 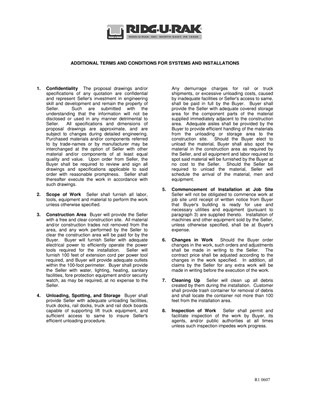 We felt the investment in the Base Isolators provided an extra level of protection for our valuable wines, making it an easy decision.